On this page, you will find information, statistics, and resources about the death penalty at the county level.

Why are counties the key to ending the death penalty?

Geography plays a significant role in the application of the death penalty.

Seeking the death penalty is at the discretion of the prosecutor. There are more than 200 elected County and District Attorneys in the State of Texas. 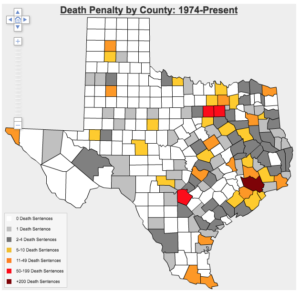 “Capital Punishment: The State of the Death Penalty in Tarrant County and Texas,” blog post by Varghese Summersett PLLC, Fort Worth, Texas

“Some TX prosecutors have stopped asking for death sentences. Tarrant County’s have not.” Fort Worth Star-Telegram, December 17, 2019

“Meet a new breed of prosecutor”

“Law and the New Order: A Fresh Wave of District Attorneys Is Redefining Justice”

“The next frontier in criminal justice reform”

“How Prosecutor Reform Is Shaking Up Small DA Races”

Too Broken to Fix: An In-depth Look at America’s Outlier Death Penalty Counties Part I and Part II from The Fair Punishment Project

What can you do?

There are many opportunities for civic and political engagement at the local level: