Gallup first began measuring support for the death penalty in 1936 and has included the issue in annual updates since 1999. 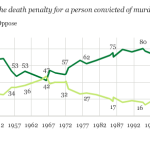 The poll reveals stark differences across political affiliations, with 81% of Republicans currently favoring the death penalty, compared with 47% of Democrats and 60% of Independents.  According to Gallup, “Support among all three party groups has declined in the last 25 years, with the largest drop among Democrats. Democrats’ level of support is currently down 28 percentage points from its 1994 peak.”

A slim majority of Americans – 52% – believe that the death penalty is applied fairly in the United States, according to the poll.

You can find more details at http://www.gallup.com/poll/165626/death-penalty-support-lowest-years.aspx.