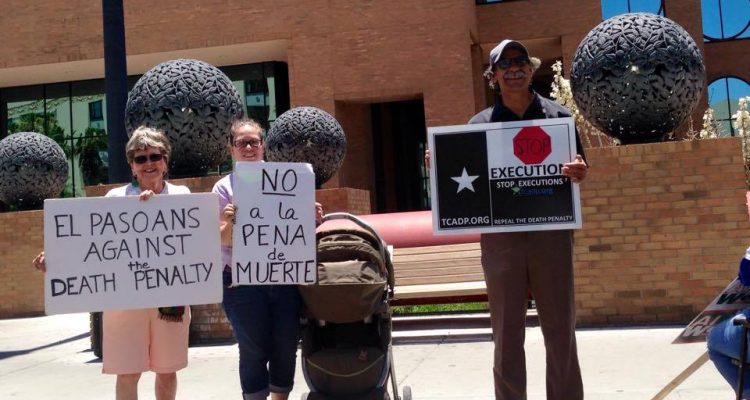 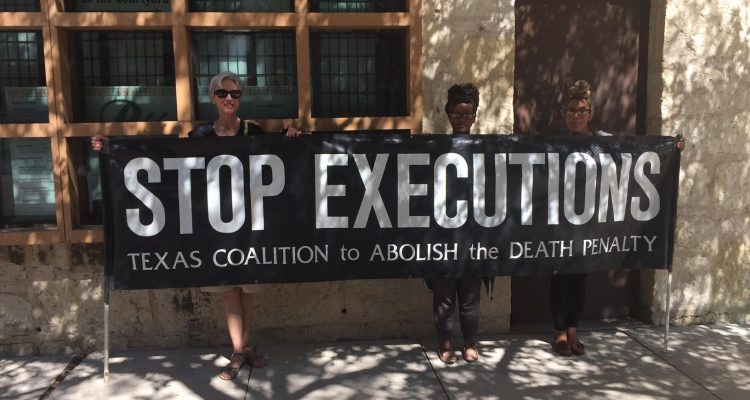 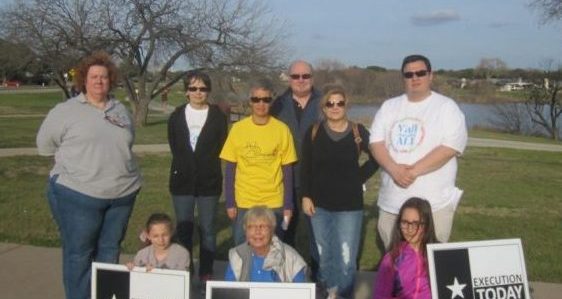 On this page, you will find information on clemency campaigns, the locations of vigils across Texas on the days of executions, and contact information for the Governor of Texas and the Texas Board of Pardons and Paroles. Follow TCADP on Twitter @TCADPdotORG for case updates.

Updates on previous clemency campaigns in 2021

Stephen Barbee
Stephen Barbee, who was scheduled to be executed on October 12, 2021, was granted a stay by a federal judge on October 7. Barbee was convicted and sentenced to death in Tarrant County for killing Lisa and Jayden Underwood in 2005. He faced execution two years ago but was granted a stay by the Texas Court of Criminal Appeals in response to the U.S. Supreme Court’s decision in McCoy v. Louisiana (2018). In that opinion, the Justices ruled that “a defendant has the right to insist that counsel refrain from admitting guilt, even when counsel’s experience-based view is that confessing guilt offers the defendant the best chance to avoid the death penalty.” During his trial, Barbee’s lawyers unexpectedly and impermissibly conceded his guilt to the jury despite Barbee’s insistence on his innocence.

On October 7, a federal judge granted a stay to Barbee after considering his complaint that the Texas Department of Criminal Justice was planning to carry out his execution in a way that would violate his right to the free exercise of his religious beliefs. His attorney had asked for a stay of execution based on an identical claim raised by John Ramirez, for whom the U.S. Supreme Court recently granted a stay. The Justices will hear oral argument in the Ramirez case on November 1, 2021.

Thanks to everyone who contacted the Texas Board of Pardons and Paroles and Governor Abbott in support of Barbee’s application for clemency or at least a reprieve so the Board could fully investigate and consider the facts of his case, including the questions surrounding the reliability of his conviction and fairness of his trial.

Rick Rhoades
The State of Texas executed Rick Rhoades on September 28, 2021 after the U.S. Supreme Court declined to issue a stay. Rhoades’ attorneys had sought juror information that might have called into question the fairness of his 1992 trial. They argued that his constitutional rights were being violated and had sought the stay so that they could continue to litigate the question of whether he should be granted access to the materials necessary to conduct a thorough comparison between individuals who were allowed to serve on the jury and those who were struck by the State. Rhoades is the third person put to death in Texas this year. We are grateful to everyone who contacted the Board of Pardons and Paroles and Governor Abbott in support of his application for clemency or a reprieve.

John Ramirez
On September 8, 2021 around 9:00 PM Central Time – three hours after he was scheduled to be put to death – the U.S. Supreme Court granted a stay of execution to John Ramirez. The Justices also granted his petition for certiorari and will consider the issues raised in Ramirez’s appeal relating to whether his spiritual advisor can pray aloud and lay hands on him in the execution chamber. It was the third execution date Ramirez has faced since 2017.  Learn more.

We are grateful to everyone who contacted the Texas Board of Pardons and Paroles and Governor Greg Abbott in support of John Ramirez’s clemency application, shared his story on social media, or otherwise took action on his behalf.

Quintin Phillipe Jones
On May 19, 2021, the State of Texas executed Quintin (“Quin”) Jones despite the pleas for mercy from his great-aunt Mattie Long, who is the sister of the victim, Berthena Bryant, as well as an outpouring of support from people worldwide touched by Quin’s heart-wrenching appeal for his own life. As the first execution in Texas in more than 10 months, it took place without any media witnesses present, a disturbing departure from the standard practice.

Counsel for Quin Jones had filed a complaint in federal court in response to the Texas Board of Pardons and Paroles’ unanimous vote to reject Quin’s clemency application. The complaint argued that race appears to have played an impermissible role in the Board’s decision to deny Quin, a Black man, a commutation of this sentence.  It drew parallels to the case of Thomas Whitaker, a white man who received an unanimous recommendation for clemency from this same Board in 2018.

To learn more about Quin and read excerpts from his letters to his friend and New York Times-bestselling author, Suleika Jaouad, visit https://www.clemencyforquin.com.

Vigils
[NOTE: These are pre-pandemic vigil locations.] TCADP members throughout the state hold vigils on the days of executions in Texas. We encourage your participation in these local actions as a form of witness against state-sanctioned killing. Check the TCADP website for any last-minute developments regarding stays of execution.

Huntsville (Location of Executions) Corner of 12th and Ave. I (in front of Walls Unit) at 5:15 PM

Austin (Site 3) –  A prayer vigil is held after the noon Mass in the chapel of St. Catherine of Sienna parish on each day there is an execution scheduled. The prayer service runs for about ten minutes. All are invited to attend.

Carrollton – Ecumenical Vigil hosted by Advocates for Justice and Peace located across from Holy Covenant UMC, Southeast Corner of Josey Lane and Peters Colony Road, 6:30 PM on the day of an execution.

College Station – 5:30 to 6 PM, east of Texas A&M campus at the corner of Walton and Texas Ave. across the street from the main entrance.

Copperas Cove – On days of execution, a prayer vigil will be held immediately following the 5:30 PM mass at Holy Family Catholic Church (1001 Georgetown Rd. ) to pray for those on death row awaiting execution, their families, the victims and their families, all involved in executions and for an end to the death penalty.

Dallas – Execution day at 5:30 PM on the Mockingbird Bridge at Central Expressway. Sponsored by: Dallas Peace and Justice Center.

Denton – Execution day at at 6 PM at the corner of Oak and Elm on the square.

At this time, the following parishes have confirmed vigils. Please check parish bulletin, or contact the church directly for more information:

McKinney – St. Gabriel the Archangel Catholic Community, 110 St. Gabriel Way, on the last Sunday of the month, following the 11:00 mass to remember those scheduled for execution in the following month, as well as the victims of their crimes and family members on both sides.

San Antonio (Site 3) – Join the Sisters of Divine Providence and friends in vigil and prayer from 5:30 to 6:00 PM on Texas execution days in front of Our Lady of the Lake Convent by the large crucifix.  515 S.W. 24th Street.

Spring – Prayer Vigil at 6 PM on evenings of executions at St. Edward Catholic Community, 2601 Spring Stuebner Rd, Spring, TX  77389 for the murder victim, for family and friends of the murder victim, the prison guards and correctional officers, for the family of the condemned man/woman, for the man/woman to be executed and to an end to the death penalty.

“Execution Watch” can be heard on KPFT HD-2 and online at http://www.executionwatch.org/ from 6:00 PM CT to 7:00 PM CT on any day an execution is scheduled in Texas.

Since 1976, the Board of Pardons and Paroles has recommended clemency in only five cases where the inmate faced imminent execution. Then-Governor Rick Perry rejected two of those recommendations and allowed the executions to proceed.

Henry Lee Lucas – Governor George W. Bush commuted his sentence in 1998 due to lingering concerns about his guilt. Lucas died of natural causes in prison in 2001 while serving a life sentence.

Kelsey Patterson –  The Board voted 5-1 for clemency but Governor Rick Perry rejected the recommendation.  Patterson had a long-standing diagnosis of paranoid schizophrenia. He was executed on May 18, 2004.

Kenneth Foster – Governor Perry commuted Foster’s sentence in 2007 due to concern about a Texas law that allowed capital murder defendants to be tried simultaneously. Foster had been convicted under the law of parties for a 1996 murder, even though he was sitting in a car 80 feet away at the time of the crime. He is serving a life sentence.

Robert Lee Thompson – Governor Perry rejected the Board’s recommendation for clemency even though Thompson was not the triggerman in the murder of Mansoor Rahim. He had been convicted under the law of parties. His co-defendant, Sammy Butler, the actual killer of Mr. Rahim, was tried separately and convicted on a lesser charge. Butler is serving a life sentence and will be eligible for parole. Thompson was executed on November 19, 2009.

Thomas “Bart” Whitaker – On February 22, 2018, Governor Greg Abbott accepted the Board’s unanimous recommendation of clemency for Whitaker, who was scheduled to be executed that same day.  It was the first such commutation in Texas since 2007.  Whitaker is now serving life in prison without the possibility of parole. Read the Governor’s statement here.

Please visit our Clemency Campaign Archive for more information about past cases.

You are welcome to contact the Board and Governor even when there is no specific clemency campaign.  Please note that clemency applications typically are filed 21 days before the execution date, so it is best to send a letter of support around that time. Be sure to include the TDCJ #, date of birth, and full name of the person on whose behalf you are writing.

The Board usually informs attorneys of its decision two business days before the execution date.

Here are some general talking points for your letters:

*Letters and emails are preferred by the Board.

The governor can grant clemency only upon the written recommendation of a majority of the Board of Pardons and Paroles, whose members he appoints.  He has the limited authority to grant a one-time, 30-day stay of execution.