Skip to the content
FOR IMMEDIATE RELEASE
Monday, December 7, 2009

(Austin, Texas) — New death sentences in Texas remained at historic low levels in 2009, according to the Texas Coalition to Abolish the Death Penalty’s (TCADP) newly-released report, Texas Death Penalty Developments in 2009: The Year in Review. TCADP, an Austin-based statewide, grassroots organization, releases its annual report each December in conjunction with the anniversary of the resumption of executions in Texas in 1982. 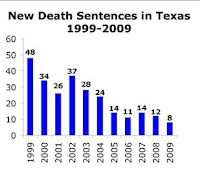 As of December 4, Texas juries had condemned eight new individuals to death in 2009. If this number remains unchanged, it will represent the lowest number of new death sentences since the U.S. Supreme Court upheld Texas’ revised death penalty statute in 1976. The report notes, however, that this year Texas once again accounted for half of all executions that took place in the United States. The state has executed a total of 447 people since 1982, out of 1,186 executions nationwide since 1977. Two hundred eight of these executions have occurred during the administration of Texas Governor Rick Perry. Among those executed, six inmates were convicted in Harris County, which alone accounts for more executions (112) than any state in the country besides Texas. Yet for the second consecutive year, Harris County did not condemn any new defendants to death (juries returned two inmates to death row). While Harris County still accounts for a third of all Texas inmates awaiting execution (106 of 332), it has sentenced just seven new individuals to death in the last four years. In the 1990s, it often sent 15 people a year to death row.

When it comes to executions, Texas is out of sync with its own shifting landscape. New death sentences have declined 60% in the past six years as prosecutors and juries have accepted the alternative punishment of life in prison without the possibility of parole as a reliable way to punish the guilty, protect society, and guard against convicting and executing innocent people.

“2009 stands as a critical year in Texas’ experience with the death penalty,” said TCADP Executive Director Kristin Houlé. “Concerns about innocence, arbitrariness, cost, and fairness generated unprecedented scrutiny of the administration of justice in the nation’s most active death penalty state. It is time for more elected officials to catch up with increasing public recognition that the Texas death penalty system is fatally flawed. We join with a swelling chorus of diverse voices, including those of law enforcement, religious leaders, murder victim family members, and state legislators, in calling for an end to this arbitrary and error-prone form of punishment.”

December 7 also marks the 20th anniversary of the execution of Carlos DeLuna, who was convicted of the 1983 slaying of Wanda Lopez at a Corpus Christi gas station. A 2005 Chicago Tribune investigative report provided compelling evidence that another individual (now deceased) committed the crime for which DeLuna was executed in 1989. Another likely wrongful execution – Cameron Todd Willingham in 2004 – has raised awareness of the irreversible risk of error associated with the death penalty. Since 1973, 139 people – including 11 Texans – have been exonerated from death rows nationwide due to evidence of their wrongful conviction. Nine exonerations occurred in 2009 and included two Texas cases: Michael Toney and Robert Springsteen.

Highlights of Texas Death Penalty Developments in 2009: The Year in Review include the following:

-In 2009, the State of Texas carried out 24 executions. Currently there are 332 inmates on death row in Texas – 322 men and 10 women.
-Five inmates were resentenced to death in 2009.
-In four capital murder trials, juries rejected the death penalty and opted for a sentence of life in prison without the possibility of parole. Levi King was spared a sentence of death in Lubbock County on October 8, 2009. His case, which had been moved from Gray County, cost nearly $1 million. King was already serving two consecutive life sentences in Missouri.
-Seven inmates scheduled for execution in 2009 received last-minute stays due to mitigating factors, new forensic evidence relating to innocence, or claims of mental retardation or mental illness. A comparable number of stays have been granted in recent years (six in 2008 and seven in 2007).
-Six inmates were removed permanently from death row in 2009; their sentences were commuted to life in prison.
-One inmate, Robert Lee Thompson, was executed despite a rare recommendation for clemency from the Texas Board of Pardons and Paroles.

TCADP’s report also recaps the 81st Texas Legislature Regular Session, during which dozens of bills related to capital punishment were introduced. This includes House Bill 682, legislation that would repeal the death penalty and replace it with life in prison without the possibility of parole, sponsored by State Representative Jessica Farrar (D-Houston).

“This session, my colleagues displayed greater openness to considering issues related to the death penalty,” said State Representative Lon Burnam (D-Fort Worth), one of the co-authors of House Bill 682. “Yet Texas lawmakers lag far behind our peers in other states. This year alone, the state of New Mexico repealed the death penalty, and legislators in Connecticut, Colorado, Montana, and New Hampshire passed abolition bills. It is time for Texans to follow suit and divert our state’s valuable resources to programs that truly prevent crime and provide meaningful victims’ services, rather than perpetuate the cycle of violence.”

Texas Death Penalty Developments in 2009: The Year in Review is available online at https://www.tcadp.org/uploads/documents/2009annualreport.pdf. Contact Kristin Houlé at khoule@tcadp.org to receive a copy directly via email.