Dave Atwood founded the Texas Coalition to Abolish the Death Penalty (TCADP) in 1995 and served on the board of directors until 2009.  He’s selflessly given untold thousands of dollars, thousands of hours, and buckets of sweat and tears to help abolish the death penalty in Texas and beyond.  His legacy is one to be admired and emulated.

As such, in 2010, the National Coalition to Abolish the Death Penalty (NCADP) announced the 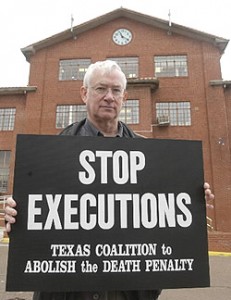 Dave Atwood Scholarship. This annual award recognizes an individual who has demonstrated a strong commitment and dedication to abolishing the death penalty in Texas.  The recipient, to be chosen by TCADP, will receive a full registration to NCADP’s Annual Conference, which will next be held January 13 – 16, 2011 in Chicago, IL.  The recipient will be recognized in the conference agenda book and at some point during the conference program.

TCADP’s board of directors is augmenting this award by reimbursing the recipient up to $350.00 for expenses related to attending the conference (travel, hotel accommodations, etc.).