Today, the Texas Court of Criminal Appeals denied Duane Buck’s appeal for a new, fair sentencing hearing free from racial bias. With today’s decision, Texas has once again reneged on the clear and unequivocal promise made by former Texas Attorney General (now U.S. Senator) John Cornyn that Mr. Buck would not face execution based on a racially biased death sentence. Despite this promise, Mr. Buck is now at grave risk of execution in Texas.  Read the statement from his attorneys below. 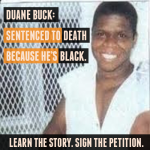 The ongoing Duane Buck case is an egregious example of racial bias in the criminal justice system. In 1997, at Mr. Buck’s capital sentencing hearing for the murders of Debra Gardner and Kenneth Butler in Harris County, Texas, the trial prosecutor elicited testimony from a psychologist that Mr. Buck posed a future danger because he’s black. The prosecutor then relied on this testimony in arguing in favor of the death penalty, and the jury sentenced him to death.

At first, there was hope Texas would rectify this mistake. Three years after Duane Buck was sentenced to death, then-Texas Attorney General (now U.S. Senator) John Cornyn identified seven cases in which Texas relied on testimony linking race to future dangerousness, including Mr. Buck’s. Recognizing the error, Cornyn promised not to oppose new sentencing hearings for these seven defendants, and Texas upheld this promise in all of the cases — except for Duane Buck’s.

Now, given another chance to remedy the situation, the Texas Criminal Court of Appeals has dropped the ball again, denying Duane Buck’s appeal for a new sentencing hearing. With today’s ruling, the Harris County District Attorney’s office could seek an execution date any time, and Duane Buck’s life is at stake once more.

As might be expected, this shocking case — and its most recent development — have provoked a large outcry in Texas and across the nation, from the civil rights community, faith leaders, elected officials, former prosecutors and judges, and numerous other prominent individuals. Even one of Mr. Buck’s trial prosecutors and the surviving victim in the case have called for a new, fair sentencing hearing.

If you have not done so already, please join more than 50,000 Texans and concerned citizens nationwide and across the world in signing a petition by one of Mr. Buck’s trial prosecutors, Linda Geffen, which urges the Harris County District Attorney’s Office to agree to a new sentencing hearing and, with this latest development, to not set an execution date.

Mr. Buck’s life was spared by the U.S. Supreme Court before his September 2011 scheduled execution. Two U.S. Supreme Court justices agreed that Mr. Buck’s death sentence requires review because “our criminal justice system should not tolerate” a death sentence “marred by racial overtones.”  In today’s ruling by the Texas Court of Criminal Appeals, three of the nine appeals court judges joined in a dissent, as noted in the statement from attorneys below.

“We are gravely disappointed that the Texas Court of Criminal Appeals has dismissed Duane Buck’s appeal and failed to recognize that his death sentence is the unconstitutional product of racial discrimination. As noted by three members of the Court, ‘[t]he record in this case reveals a chronicle of inadequate representation at every stage of the proceedings, the integrity of which is further called into question by the admission of racist and inflammatory testimony from an expert witness at the punishment stage.’  These judges recognized that this outcome ‘jeopardizes both the integrity of the underlying conviction and of this Court’s judicial processes’ and deprives Mr. Buck of ‘one full and fair opportunity to present his claims.’

“With today’s decision, Texas has once again reneged on its promise to ensure that Mr. Buck would not be executed pursuant to a death sentence that was the unfair product of a prosecutorial appeal to racial bias and stereotype. ,For this reason, more than one hundred civil rights leaders, clergy of various faiths, former judges, former prosecutors, and thousands of individuals in Texas and across the world, have joined our call for a new, fair, and colorblind sentencing for Duane Buck. We now urge the Harris County District Attorney’s Office to respect these calls and refrain from seeking an execution date for Mr. Buck. We will ask the U.S. Supreme Court to review the important due process and equal protection issues at stake in Mr. Buck’s case, and we are hopeful that the Supreme Court will intervene to right this unequivocal wrong.”