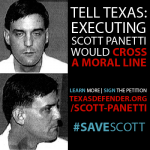 Scheduled executions
There has been an outpouring of support for Scott Panetti, a severely mentally ill man who is scheduled to be executed on Wednesday, December 3, 2014.  Those calling for clemency include the nation’s largest grassroots advocacy organization on mental illness, National Alliance on Mental Illness (NAMI); NAMI’s Texas affiliate; Mental Health America; 10 state legislators; 8 active and retired United Methodist Bishops in Texas; former U.S. Representative Ron Paul; more than 50 Evangelical Christians; and the European Union, which represents 28 nations.  Several editorial boards from major Texas newspapers also have called for officials to stop this execution.  The change.org petition from Vicki Panetti has generated more than 90,000 signatures (thanks to everyone who has signed and promoted the petition).

As of this writing, a sharply divided Texas Court of Criminal Appeals denied Panetti a stay of execution in two separate rulings.  Read attorney statements and background information on the TCADP blog and please check our website and Twitter feed for breaking news on this case.  *Update* Attorneys for Panetti have now appealed to the U.S. Supreme Court to stay the execution.

Barring a stay, vigils will take place on Wednesday in communities throughout Texas.

Eleven executions already have been scheduled for 2015.  This includes Rodney Reed, who was convicted of killing Stacey Stites in Bastrop in 1996. Compelling evidence substantiates his claim of innocence and points to another suspect with a history of violence. Read Jordan Smith’s terrific piece, “Is Texas Getting Ready to Kill an Innocent Man?” in The Intercept.

On November 25, a judge denied Reed’s request for expanded DNA testing of evidence in his case but granted a separate motion delaying his execution date from January 15 to March 5. 2015.

Keynote speaker: Tim Cole
Tim Cole is a former district attorney with more than 20 years of experience in the courtroom. He has tried over 100 felony jury trials in North Texas, including every level of felony charge. Tim was elected to four terms as 97th District Attorney (Archer, Clay & Montague Counties; 1993 to 2006) and served as assistant district attorney in the 271st District (Wise, Jack Counties; 2010-2014). He also served as Counsel to Governor Clements in 1990 and General Counsel for the Texas District and County Attorneys Association from 1988 to 1990.

Tim’s work in high-profile cases has been written about and documented in major publications. He also wrote about his personal experience in a death penalty case, “The Death Penalty Has a Face,” which was published by Texas Monthly in March 2013.

Brian Stull is a senior staff attorney with the ACLU Capital Punishment Project. As trial and appellate counsel in capital cases in North Carolina, Georgia, and Texas, he has represented several clients who were wrongfully convicted, including Manuel Velez, an innocent Texas man recently released from prison (and recipient of our 2015 Courage Award), and Max Soffar, an innocent man dying of liver cancer on Texas’s death row.

Register now to attend TCADP’s 2015 Annual Conference.  Advance registration rates are available through December 31, 2014 (rates will increase on January 1st and again after February 13th). Interested in providing an information table or placing an ad in the conference program to congratulate our award recipients? Download more information.

In case you missed it
TCADP’s Fall 2014 Newsletter
In the Fall 2014 issue of our quarterly newsletter, Seizing the Momentum, you’ll find an interview with Dorothy Van Soest, the author of Just Mercy, as well as information about a pen-pal program organized by St. Gabriel’s Ministry to the Imprisoned.  Check out photos from the dozens of events we organized this fall and read our cover story about Manuel Velez.

“Having spent the last forty years as a judge for the State of Texas, of which the last eighteen years have been as a judge on this Court, I have given a substantial amount of consideration to the propriety of the death penalty as a form of punishment for those who commit capital murder, and I now believe that it should be abolished.”

Read more from BuzzFeed and WOAI-AM.

Upcoming events & important dates
Texas Death Penalty Developments in 2014: The Year in Review
TCADP’s year-end report will document the many noteworthy developments with the death penalty this year, including an in-depth look at trends in specific counties.  Look for more details later this month.  Previous reports are available online.

December 31, 2014: Last chance to make tax-deductible donations to TCADP in 2014 and to take advantage of advance registration rates for the 2015 Annual Conference

March 9, 2015: Faith Leader Advocacy Day on the Death Penalty.  More details will be announced soon; in the meantime, please encourage all faith leaders you know to sign the Interfaith Statement of Opposition to the Death Penalty.

Support TCADP
Between now and the end of the year, TCADP seeks to raise $20,000 so that we can continue our advocacy efforts on behalf of all Texans who oppose the death penalty. Save a stamp by making your end-of-the-year, tax-deductible donation today!

If you shop on Amazon, please consider designating TCADP as your charitable organization of choice. Amazon will donate 0.5% of the price of your eligible AmazonSmile purchases to us, as long as your account connects with TCADP.

Thank you for your support and generosity!