On Saturday, August 5, former Texas Governor Mark White died in Houston at the age of 77. During his time as the 43rd governor of Texas from 1983 to 1987, White was a champion of education reform focusing on the needs of both teachers and students. Though some of his legislation was met with controversy, much of it still stands today, including limiting class size and the “no pass, no play” rule.

Governor White’s opinions on education reform never wavered, but after his time in office, he began to question his stance on the death penalty. Once a staunch supporter who oversaw 19 executions during his tenure as Governor White later spoke out against the inherent flaws of the criminal justice system.

“As I’ve watched how the death penalty has been administered over the years, both in Texas and around the country, it has become increasingly clear to me that we just don’t do a good job at any phase of the process, from ensuring that capital trials are fair to the actual handling of executions themselves.” 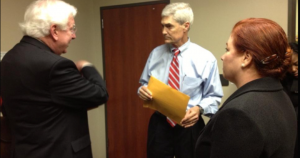 Governor White became a vocal critic of the death penalty. He raised concern over the cases of numerous individuals, including Cameron Todd Willingham, Duane Buck, Milton Mathis, Charles Hood, and, most recently, TaiChin Preyor. He was a valued member of the Constitution Project’s Death Penalty Committee and the American Bar Association’s Texas Capital Punishment Assessment Team.

In a recent interview with the Houston Chronicle, White gave a character-defining quote, “I never give up on this state, on this country. If you give up, then you’re part of the problem.” As a governor, a friend, an advocate, and an ally, Mark White will be greatly missed.

There will be a memorial service at the Second Baptist Church in Houston on Wednesday, August 9. Governor White will lay in state from 12 to 3 PM in the Capitol Rotunda in Austin on Thursday, August 10. For more information about these services, please visit http://bit.ly/2uzi5bz.