Today, December 13, 2010, the Texas Coalition to Abolish the Death Penalty (TCADP) released its annual report, Texas Death Penalty Developments in 2010: The Year in Review. TCADP releases this annual report each December in conjunction with the anniversary of the resumption of executions in Texas in 1982.

According to the report, death sentences in Texas have dropped more than 70% since 2003, reaching a historic low in 2010. Juries condemned eight new individuals to death in Texas in 2010, the lowest number of new death sentences since the U.S. Supreme Court upheld Texas’ revised death penalty statute in 1976.  These new sentences occurred in six counties: Brazos; Dallas; Harris; Nueces; Rusk; and Travis.  This represents just 2% of all Texas counties.

Recent sentencing trends illustrate the arbitrary and biased imposition of the death penalty.  An analysis of data from 2007 to 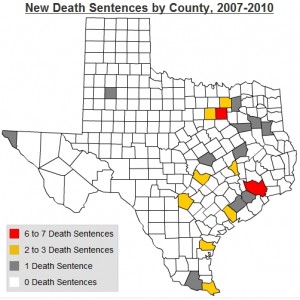 In conjunction with the report, TCADP has produced two interactive maps highlighting new death sentences by county from 2007 to 2010 and from 1976 to 2010.  Clicking on each county reveals the total number of sentences, the number executed, the number awaiting execution, and the number exonerated.  See below for links to each map.

“Texas – along with the rest of the nation – is moving away from the death penalty,” said Kristin Houlé, Executive Director of the Texas Coalition to Abolish the Death Penalty.  “The system is broken beyond repair, and the continued decline in new death sentences shows that jurors and prosecutors in Texas are seeking other ways to address violent crime.”

Concerns about wrongful convictions and emerging evidence of wrongful executions dominated headlines this year.  On October 27, 2010 Anthony Graves walked out of the Burleson County Jail after spending 18 years in prison – including 12 years on death row – for a crime he did not commit. Prosecutors dropped all charges against Graves and declared him innocent after conducting their own investigation of the case.  His conviction was based on the testimony of Robert Carter, who was convicted and executed for the same crime in 2000 and who recanted several times, including from the gurney.  Anthony Graves is the 12th person in Texas to be wrongfully convicted and removed from death row and the 138th nationwide.

The ongoing inquiry into the case of Cameron Todd Willingham also underscored the fallibility of the system.  Willingham was executed in 2004 for setting a fire to his Corsicana home in 1991 that killed his three young daughters. The Texas Forensic Science Commission admitted “flaws” in the science used to convict him.  In January it will hold a special meeting with some of the fire experts who have examined the case since the time of conviction and concluded that there was no evidence to support the finding of arson.

In another case of “flawed” science, recent DNA testing of evidence that was used to convict and execute Claude Jones ten years ago this month revealed that the strand of hair belonged to the victim, not to Jones, as a forensic expert testified during his 1990 trial. While the DNA results do not exonerate Jones, they raise serious questions about the reliability of his conviction.

Other highlights of Texas Death Penalty Developments in 2010: The Year in Review include the following:

“2010 may go down in history as the ‘Year of Doubt,’ when case after case exposed the flaws and failures of the Texas death penalty and shook public faith in the criminal justice system to its core,” said Houlé.  “During this time of fiscal crisis, TCADP urges all elected officials to take a good hard look at the death penalty system and ask whether this is a good use of tax payers’ dollars when there are alternative ways to protect society and punish those who are truly guilty.”

Texas Death Penalty Developments in 2010: The Year in Review is available online at www.tcadp.org/TexasDeathPenaltyDevelopments2010.pdf .  Contact Kristin Houlé at khoule@tcadp.org to receive a copy directly via email.