Infographics are available at https://tcadp.org/2013tcadpinfographics/.

One Third of All New Texas Death Sentences in 2013 Came from Dallas County,
According to New Report by TCADP

(Austin, Texas) — One third of all new death sentences in Texas were imposed in just one county this year, according to the Texas Coalition to Abolish the Death Penalty’s (TCADP) new report, Texas Death Penalty Developments in 2013: The Year in Review.  The report documents Dallas County’s emergence as the state’s most active death penalty jurisdiction, accounting for 20% of new death sentences since 2008.

Over the last six years, Dallas County has imposed nearly twice as many new death sentences as Harris County, which alone has sent nearly 300 people to death row since 1976. 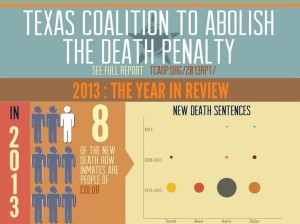 Juries condemned nine new individuals to death in Texas this year, the same number of death sentences imposed in 2012.  New death sentences in Texas have declined more than 75% over the last decade and numbered in the single digits for the last five years.

A total of seven counties in Texas accounted for the new death row inmates in 2013.  Notably, three of the highest sentencing jurisdictions in recent years did not impose any death sentences this year, and no inmates were re-sentenced to death in the state.

“While most of Texas is moving away from the death penalty, Dallas County has emerged as a major outlier in its pursuit of the ultimate punishment, particularly for defendants of color,” said Kristin Houlé, Executive Director of the Texas Coalition to Abolish the Death Penalty.  “These troubling patterns directly counter Dallas’s reputation as a leader in criminal justice reform.”

Halfway through the year, the State of Texas carried out its 500th execution since 1982, putting Kimberly McCarthy to death for the 1997 murder of Dorothy Booth in Dallas County. McCarthy, who was African-American, was the fourth woman executed by the state and the first since 2005.

Her attorney argued that the jury selection process in her second trial was tainted by racial discrimination: of the twelve jurors seated at trial, all were white, except one, and eligible non-white jurors were excluded from serving by the State. While two earlier execution dates this year were postponed, the courts refused to intervene a third time.

The State of Texas carried out 16 executions in 2013, a slight increase from 2012, when 15 executions took place. Executions are now being carried out through the use of a compounded form of the drug pentobarbital, and the Texas Department of Criminal Justice has been criticized for a lack of transparency when it comes to the state’s lethal injection protocol.

Of the 16 people executed in Texas this year, eight were African-American, five were white, and three were Hispanic.

“Although Texas is using the death penalty less, the state still uses it disproportionately against people of color,” said Kathryn Kase, Executive Director of the Texas Defender Service.  “Texas’s failure to effectively address this recurring problem demonstrates, yet again, the deep flaws in the state’s capital punishment system.”

Other highlights of Texas Death Penalty Developments in 2013: The Year in Review:

“Attitudes toward the death penalty are shifting as public confidence in the criminal justice system erodes,” said Houlé.  “At this critical moment in our state’s experience with the death penalty, TCADP urges concerned citizens and elected officials to confront the realities of this irreversible and costly punishment and seek alternative ways of achieving justice.”

TCADP is a statewide, grassroots advocacy organization based in Austin.

Texas Death Penalty Developments in 2013: The Year in Review is available online at www.tcadp.org/TexasDeathPenaltyDevelopments2013.pdf. 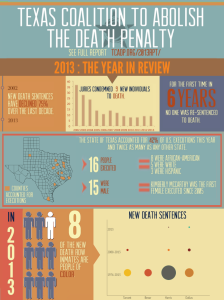 Contact report author Kristin Houlé at khoule@tcadp.org to receive a copy directly via email.  See the report for additional tables illustrating the race of defendants sentenced to death in the last six years and other recent trends.

Infographics are available at https://tcadp.org/2013tcadpinfographics/.

The following individuals are available for further comment on the topics raised by these year-end statistics:

Join TCADP and guest moderator Jordan Smith of the Austin Chronicle today, Tuesday, December 17, 2013 at 3:00 PM CST for a Twitter chat to discuss #Texas #deathpenalty trends and ask questions about this report.  Follow #2013TXDP for the chat and to ask questions.  @TCADPdotORG @chronic_jordan

“True Conviction,” is available to stream for free on PBS through July 26, 2020. Filmed in Dallas, this wonderful documentary explores the investigative and philanthropic work of exonorees Christopher Scott, Johnnie Lindsey, and Steven Phillips, who collectively spent more than sixty years in prison for crimes they did not commit. Don’t miss it!