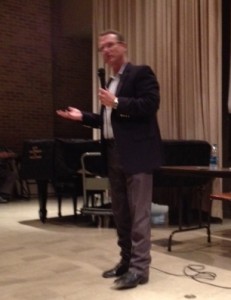 Cole was elected to four terms as the 97th District Attorney (Archer, Clay & Montague Counties; 1993 to 2006) and served as assistant district attorney in the 271st District (Wise, Jack Counties; 2010-2014).  He now works in private practice as a criminal defense attorney in Fort Worth.  Cole served as the keynote speaker for the TCADP 2015 Annual Conference, which took place in February in Austin.

The editorial asserts that the death penalty is falling out of favor both with juries and prosecutors and cites the growing list of wrongfully convicted men in Texas as one reason for the shift.  Cost and geography also play a role, as explained by Cole:

Further, Cole has seen from the inside how community and financial pressure bear on a DA’s decision to seek one punishment vs. another. That means, he said, that a similar crime could mean the death penalty in one county but a prison sentence a few miles away in another jurisdiction. It comes down to the call of a single elected official whose annual budget may or may not bear the expense of a murder trial.

Read the full editorial, as well as an opinion piece by Cole that appeared in the Fort Worth Star-Telegram (“This year, Texans live without imposing new death sentences,” July 23, 2015).

The Dallas Morning News is one of four newspapers in Texas that advocates for abolition of the death penalty.  Other papers on this list are the Austin American-Statesman, the Houston Chronicle, and the Fort Worth Star-Telegram.  The Morning News has advocated for an end to the death penalty since 2007.