Executions
The State of Texas is scheduled to carry out two executions this month:

TCADP encourages all members to attend a vigil in your community on the day of executions. Information and updates on these cases will be available on our website and through Facebook and Twitter.

Recent Death Penalty Developments
Texas has executed two people to date in 2014, out of ten nationwide. To date this year, there have been two new death sentences and one jury rejection:

Featured Events
Robert Redford’s “Death Row Stories” to Premiere on CNN
“Death Row Stories” is a new 8-part series premiering on March 9 on CNN that will examine actual death penalty cases. The show is produced by Robert Redford and narrated by Dead Man Walking star Susan Sarandon. Redford said, “This series is about the search for justice and truth, we are pleased to … tell these important stories and give a voice to these cases.” Prior to the premiere, CNN is offering interested parties an opportunity for a preview and the ability to participate in a Google Hangout featuring a discussion by the producers and law professors John Blume of Cornell and Robert Blecker of New York Law School. The Google Hangout will be held March 5 at 6 pm EST and is open to the public, but an RSVP is required. A promo for the show can be found here.  (CNN, “Death Row Stories,” Press materials; DPIC posted Feb. 21, 2014).

Amplify Austin is a community-wide day of online philanthropy sponsored by “I Live Here, I Give Here”, with the goal of raising $4 million in 24 hours for Austin-based participating nonprofits, including TCADP!

Last year we raised more than $5,000 through this campaign!
Beginning at 6pm on March 20th, through 6pm on March 21st, TCADP is asking all of our supporters (not just those living in Austin) to increase their giving or give for the first time at the $25 level or above.  During the 24-hour giving period, you can give at https://amplifyatx.ilivehereigivehere.org/TCADP/overview.

You might even think about giving Friday, March 21, at:

Ways you can help TCADP Amplify Austin and fight Slacktivism!

TCADP 2014 Annual Conference:  “Lighting the Way”
Our 2014 Annual Conference, which took place on Saturday, February 22 at University Christian Church in Fort Worth, included a record number of attendees, who all seemed to have great take aways from their day.  Videos of the keynote address and awards ceremony are available on the TCADP YouTube Channel.  Check out the photos!  See a compilation of the social media posts from the Conference – sfy.co/bbDe.

A tremendous thank you to the staff at University Christian Church and all the speakers, sponsors, and TCADP members and volunteers who made the conference possible.  Read more about them and everything that occurred at the conference in the program.  Save the date: TCADP 2015 Annual Conference, February 21, 2015 in Austin,Texas!

In the News
We recently noted the fact that 10 years have passed since Cameron Todd Willingham was executed by the State of Texas, despite strong evidence of his innocence and serious doubts as to whether the fire that took the lives of his three young daughters was caused by arson. Last week, the Innocence Project filed new documents with the Texas Board of Pardons and Paroles in its petition for a posthumous pardon for Willingham. The documents point to new evidence that strongly suggests that jailhouse informant Johnny Webb received a deal from Navarro County District Attorney John Jackson in exchange for his testimony against Willingham at trial.

According to the Innocence Project, “This new evidence also strongly suggests that Jackson, who had since become a district court judge, deceived the Board of Pardons and Paroles and the Navarro County District Attorney’s Office about the existence of a deal, which had they known about, would have almost certainly spared Willingham’s life.”   Read more about this latest development in the New York Times and Houston Chronicle. If you haven’t done so already, sign this petition calling on the Texas Board of Pardons and Paroles to investigate Willingham’s case. 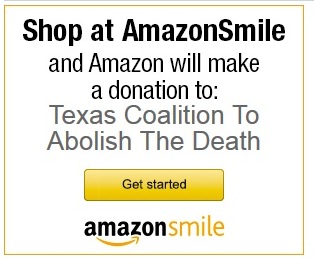 If you enjoy shopping on Amazon, please consider sharing some of your purchase power with TCADP.  Amazon will donate 0.5% of the price of your eligible AmazonSmile purchases to the charitable organization of your choice.

20-21 Amplify Austin – Concentrate your giving Friday, March 21 from 1:00 to 2:00pm if possible. https://amplifyatx.ilivehereigivehere.org/TCADP