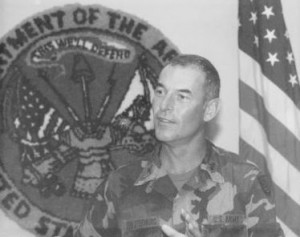 It has been two decades since I retired from the United States Army, completing a career of twenty-seven years (1964-1991).  It is also slightly more than a dozen years since I have been active in the effort to end the use of capital punishment in the United States.

Some people may find those two statements about my life to be incongruent; they don’t appear to track; it doesn’t seem “natural” that a solider would oppose the death penalty.  For me, there is a straight line between my service to the nation and my work to end the practice of state sponsored killing. As our nation pauses to honor the service of our veterans, I wanted to take the opportunity to lay out why I and a number of my fellow veterans work so hard to end executions in the United States.

The soldier takes an oath “…to support and defend the Constitution of the United States…”  I once heard a Franciscan Priest say, “This life is not about you.  You are about life.”  A soldier lives that out.

But it is also something more.  It is about us, the American people, the nation as a whole.  We Americans are better people than what we demonstrate by our use of capital punishment.  We proudly state that our nation was founded on the concepts of life and liberty.  Congress has passed and the American people have approved amendments to our Constitution to protect the lives of our citizens.  The death penalty stands in direct opposition to these concepts.

My service as a soldier was to protect and defend the nation.  My work to end capital punishment is to protect and defend the ideals established with our nation’s founding.  The code of the U.S. Army is Duty, Honor, Country.  I believe that I have lived to that code both as a soldier and as a person working to end the use of capital punishment in the United States.  This life is not about me; I am about life.

President, Board of Directors, Texas Coalition to Abolish the Death Penalty