Skip to the content
In This Edition:
Scheduled Executions
TCADP Summer Newsletter

Executions
The State of Texas has carried out 11 executions to date in 2013, including 3 executions in July.  Nationwide, 22 executions have occurred this year.

While no executions will take place in August, there are five executions on the schedule between September and November. 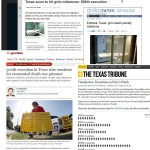 Our summer newsletter was mailed to TCADP members in July and is now available online.

Front Page:  In June, the State of Texas carried out its 500th execution since 1982.  Who were these 500 men and women and what do their executions say about our criminal justice system?  Do the numbers match current attitudes in the U.S. and even in Texas? Read more about this Texas milestone.

Consider how one mother responded when her son, a Beaumont police officer, was killed in the line of duty. “Voices of Texas” can be found on page 4.

TCADP has active and passionate members around the state of Texas who provide assistance in educating the public and recruiting new supporters. News from the Field can be found on page 9.

Announcements
Calling all policy wonks and novice lobbyists! TCADP seeks new applicants for its successful Lobby Corps program, established in 2012. Join the current group of a dozen specially trained advocates in advancing TCADP’s legislative goals during the interim session and at the State Capitol in 2015. Apply online by September 16, 2013. More information is available here.

In the News
More than 2,000 Cases Under Review for Potentially Flawed Scientific Testimony
Last month, the Innocence Project and the National Association for Criminal Defense Lawyers announced an unprecedented agreement with the FBI and the Department of Justice to review more than 2,000 criminal cases in which the FBI conducted microscopic hair analysis of crime scene evidence. According to the Innocence Project, “the review will focus on specific cases in which FBI Laboratory reports and testimony included statements that were scientifically invalid.” Under the agreement, capital cases, particularly those with an execution date, will be given the highest priority.  Cases where the defendant has been executed will also be part of the review. According to the Washington Post, the review has already identified 27 death penalty convictions “in which FBI forensic experts may have mistakenly linked defendants to crimes with exaggerated scientific testimony.”

ACLU Issues Report on Death Row Conditions
A new report from the ACLU, “A Death Before Dying: Solitary Confinement on Death Row,” chronicles conditions on death rows throughout the United States. According to the report, 93% of states lock away their death-row prisoners alone in their cells for 22-24 hours per day. TCADP Advisory Board Member Anthony Graves has written a blog and recorded a video to raise awareness of the report and the conditions he experienced while wrongfully incarcerated and held in solitary confinement on death row in Texas.

TCADP 2013 Membership Drive!
Did you like what you read in our summer newsletter? Want to help TCADP do even more to raise awareness of the flaws and failures of the death penalty? Support our work with a generous donation today!  Consider a sustaining gift through our Partners for Justice program. All donations to TCADP are tax-deductible.

Learn more about the benefits of TCADP membership.

Upcoming Events
August 12:  Criminal Justice Policy Session at Wesley UMC, Huntsville
Texas Impact will provide a brief overview of adult and juvenile criminal justice systems as they currently stand, with a specific focus on ways the faith community can support reform and advocate on behalf of individuals adversely impacted by the system. Topics will include conditions of confinement, racial disparity, juvenile justice, the criminalization of mental illness and capital punishment. This event is open to the public, but organizers would prefer an RSVP to 936-295-7459 to help prepare.

September 9: Author and Renowned Activist to Visit Lewisville
Sister Helen Prejean, the author of Dead Man Walking:  An Eyewitness Account of the Death Penalty, will be speaking at St. Philip the Apostle Catholic Church in Lewisville, Texas on Monday, September 9 at 7PM. She will discuss the 20th anniversary of the book’s publication and her work as one of the nation’s most prominent critics of the death penalty.  All are welcome!  St. Philip the Apostle Catholic Church Worship Center, 1897 West Main Street, Lewisville, TX. www.stphilipcc.org

September 11: Austin Membership Luncheon
Join us on Wednesday, September 11 from 12:00 to 1:00 PM as we launch our bi-monthly lunch series in Austin. Our guest speaker will be Dr. Marilyn Armour, an Associate Professor at The University of Texas at Austin and the Director of The Institute for Restorative Justice and Restorative Dialogue. Dr. Armour will discuss her recent publication “The Ultimate Penal Sanction and ‘Closure’ for Survivors of Homicide Victims,” in which she compares the impact of the ultimate penal sanction on victim survivors in a death penalty state (Texas) and a non-death penalty state (Minnesota). Stay tuned for announcements about membership gatherings in other cities this fall!

For more information about these events, email info@tcadp.org.